While certain established art journals are busy self-destructing, the artist and curator Irene de Craen has chosen this annus horribilis to launch Errant Journal, a new publication affiliated with the Amsterdam-based decolonial art space Framer Framed. I’m not involved with this, beyond some informal advice and feedback, but I thought I’d give a shout-out to a promising but precarious initiative. The first issue, with a chronopolitical focus, can be ordered here. 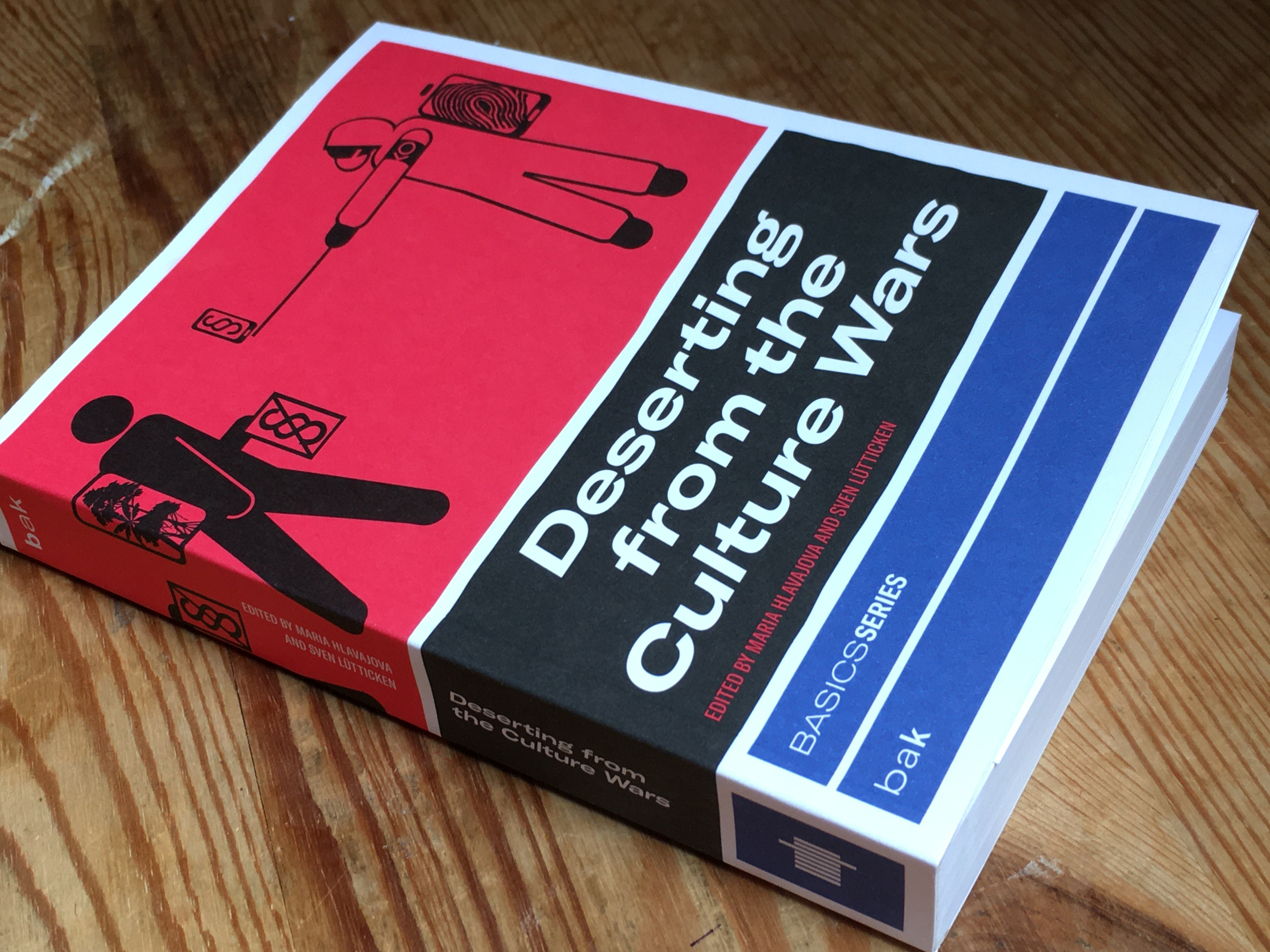 As Futurity Report is making its way through reopened bookstores and online retailers, another edited volume has just arrived from the printer’s: Deserting from the Culture Wars, which comes out of the project I did with BAK last November, and which is co-published by BAK and MIT Press. The book won’t actually hit stores before October, but it can be preordered. Editing this volume sometimes felt like Achilles racing the tortoise, as it seemed impossible to keep up with events. Even so, as the culture wars keep raging (now with face masks being added to the arsenal), I think the book’s urgency and pertinence have only increased. 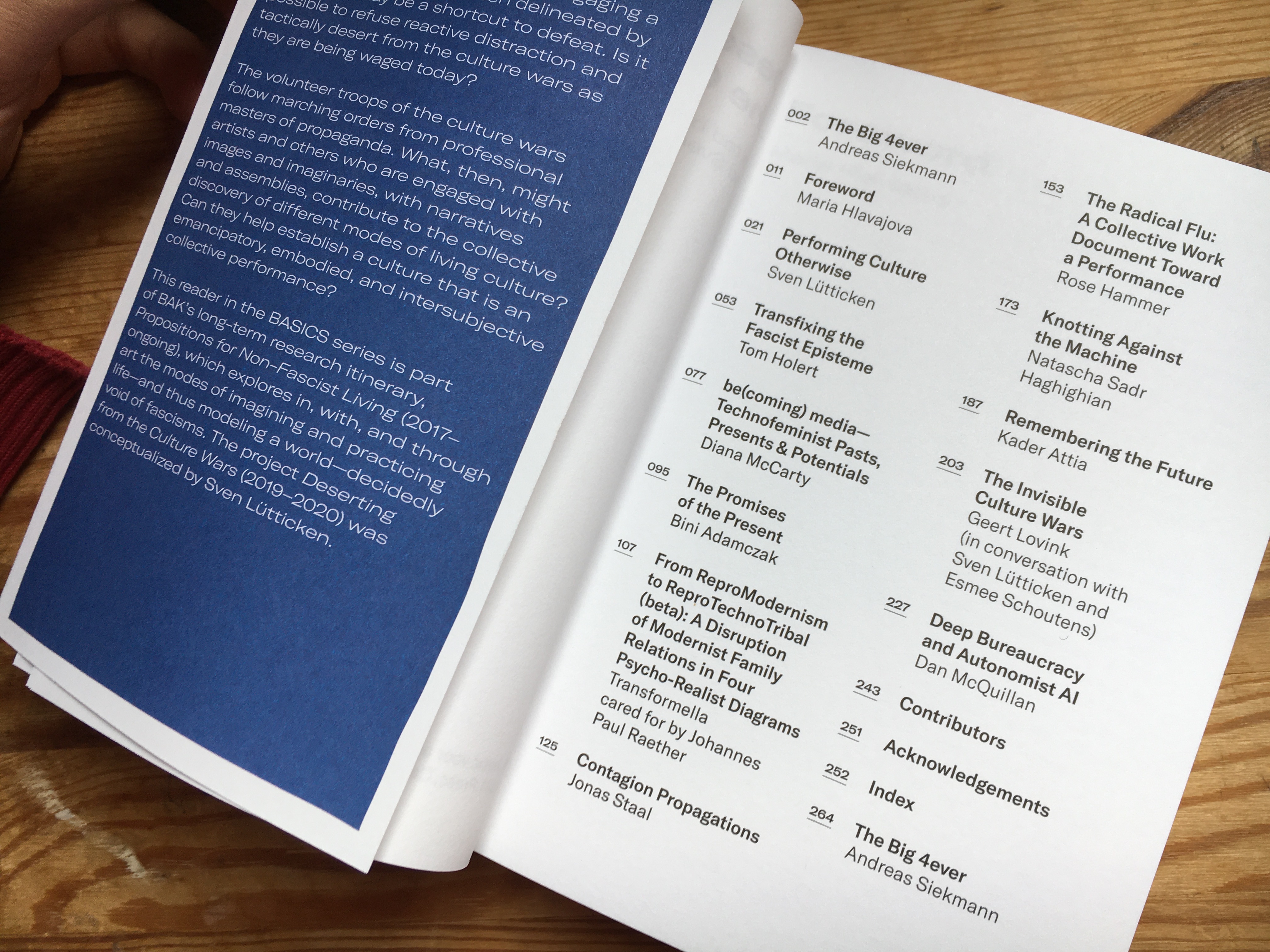 One text is, sadly, a document of a bygone era: in his essay in Deserting from the Culture Wars, Kader Attia expounds the thinking behind , the decolonial space he founded near the Gare du Nord in Paris. By now, is no more; it did not survive the corona lockdown. For me, in the last few years has been one of a handful of art and cultural spaces in Europe whose practice define and transform the moment. Kader and the team created and curated a montage of positions and practices that was more than the sum of its parts, and at its best went beyond the simulation of dialogue or confrontational one-upmanship. The whole thing amounted to a generative social sculpture that the likes of Beuys and Hirschhorn can only dream of. 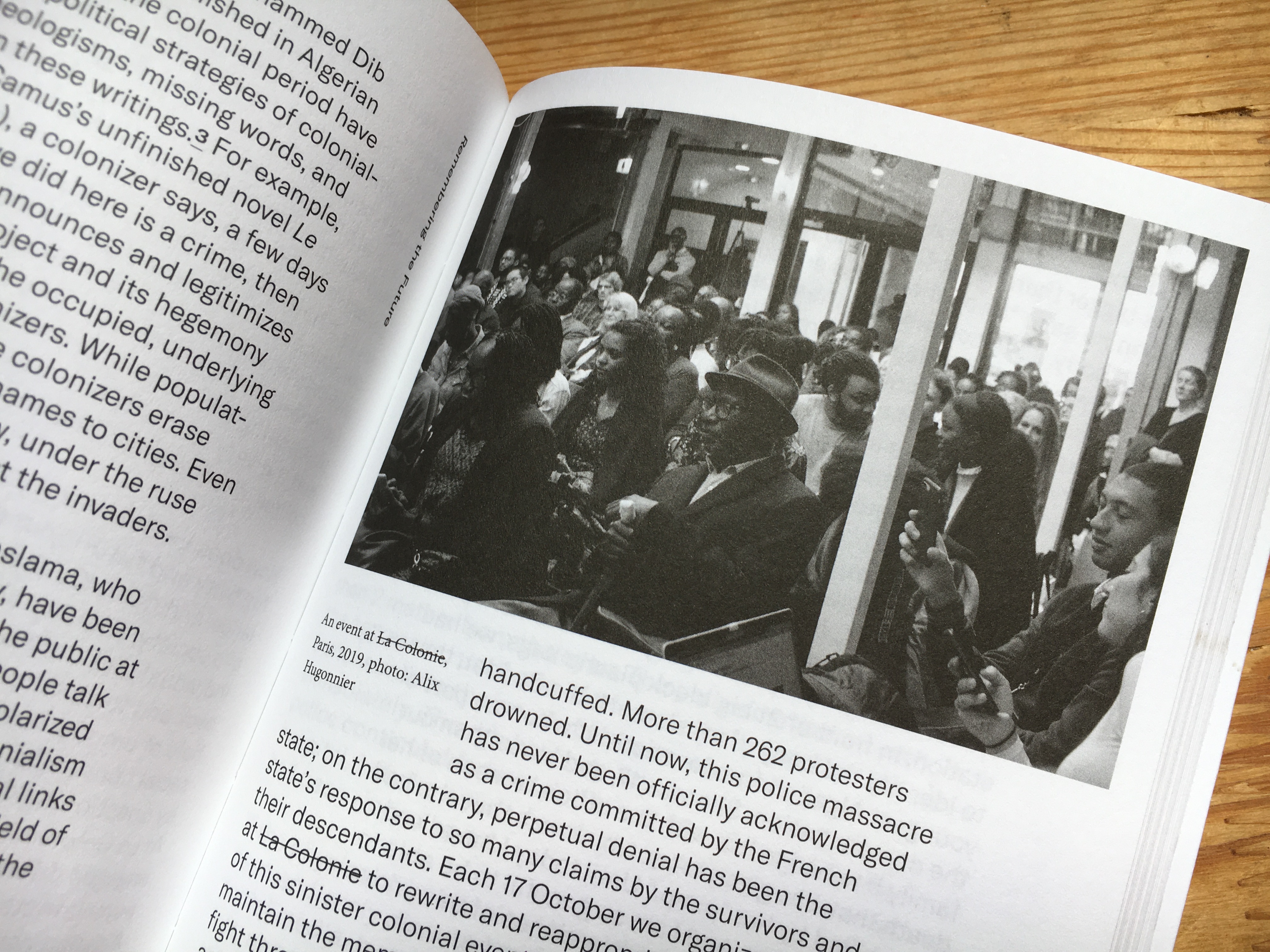 To help the team “open a new space in Paris or its banlieue,” you can make a donation on one of the following platforms: 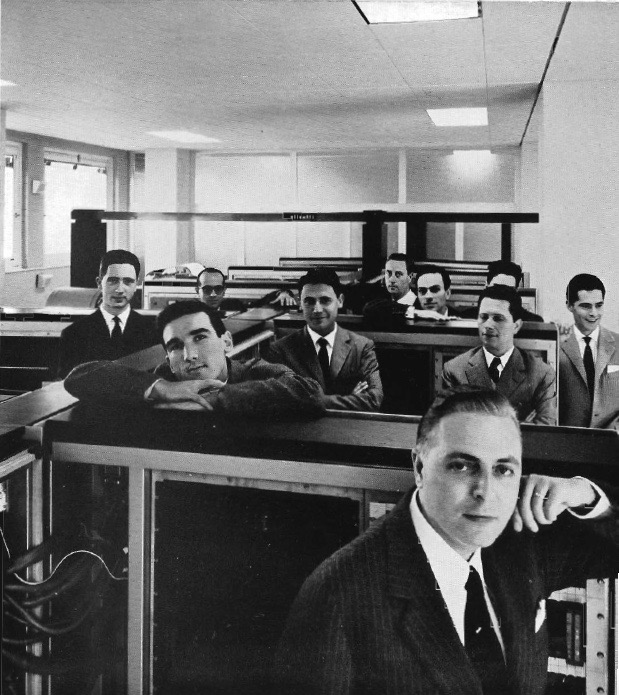 From the “apocalypse in slow motion” that is Miami, Gean Moreno informs me that the publication accompanying his exhibition Ettore Sottsass and the Social Factory is finally out. The publisher, Prestel, touts the book as a “revelatory collection of essays by leading thinkers in the fields of political theory, economics, the media, design history, and cultural theory”—but, in a kind of lateral dick move, they do not deign to name any of said thinkers. I suppose I must be one of them, as I contributed an essay titled “From the Imaginist Bauhaus to Olivetti: Ettore Sottsass between Proto-Situationism and Post-Fordism.” Sara Cattin provided essential research assistance in Italy, and equally necessary translation services. 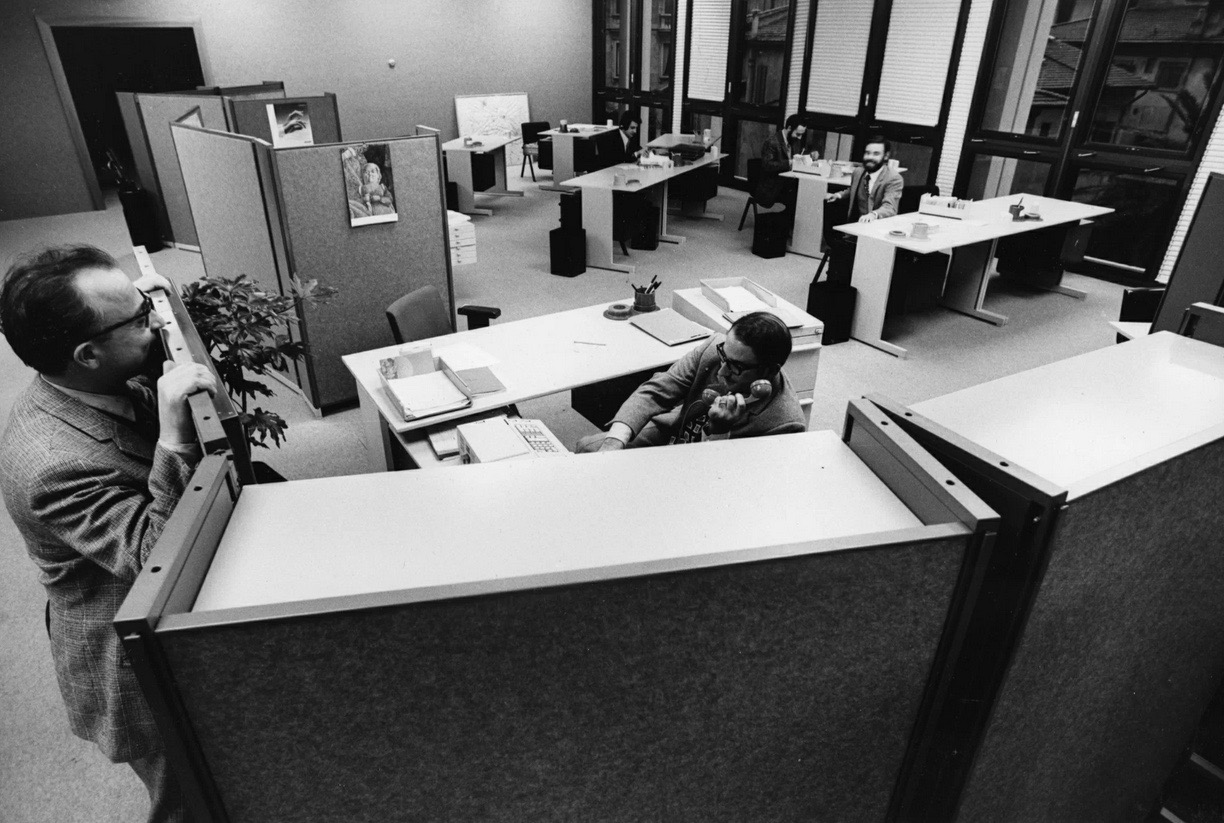 I’m not that frequently invited to write substantial monographic texts (and given the time to do it), so I’m very grateful to Gean for making this possible. I have no doubt that this book will be a remarkable resource. Gean is also the editor of the recent-ish Verso volume In the Mind But Not From There: Real Abstraction and Contemporary Art, to which I likewise contributed. 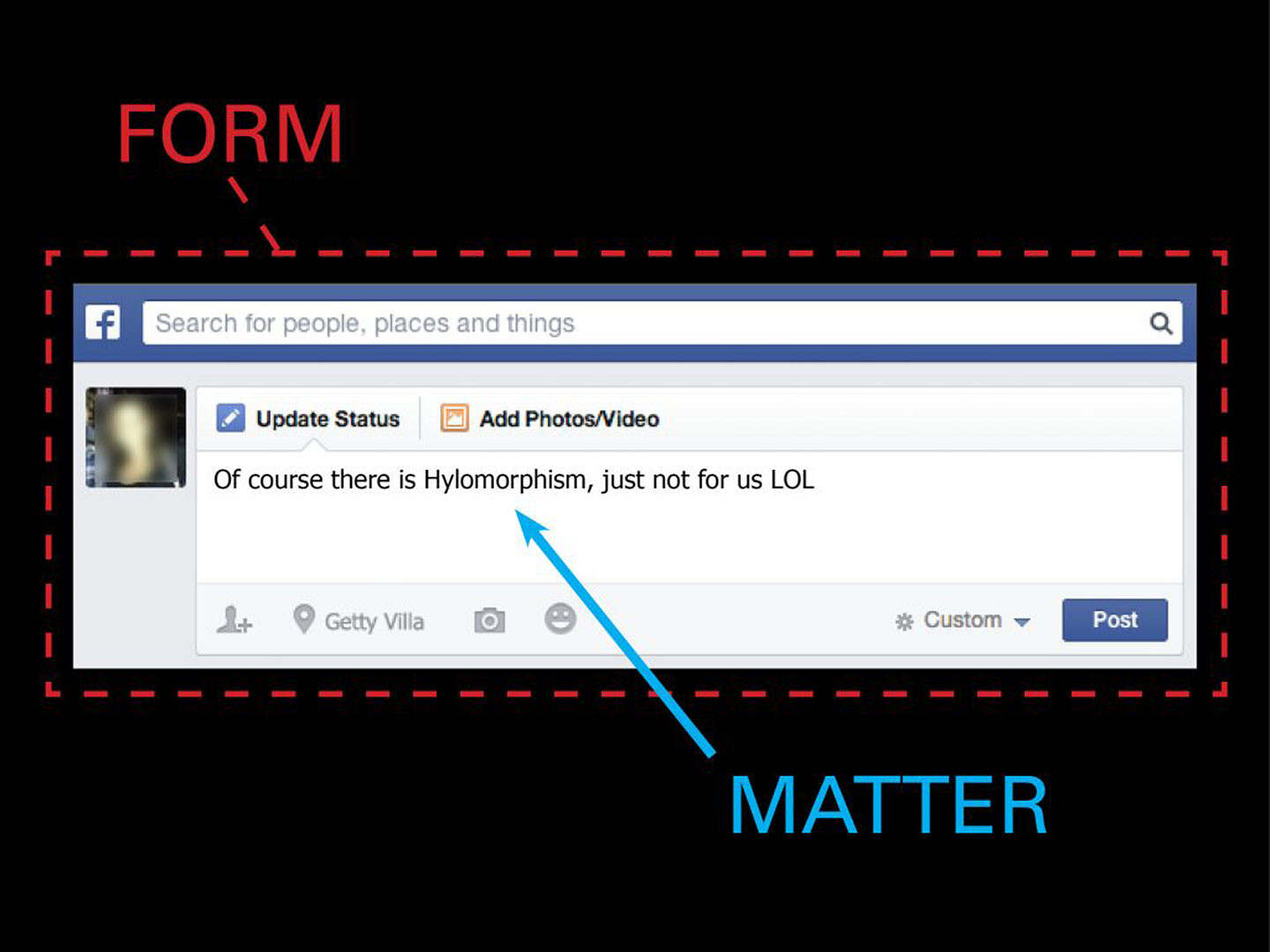 The June 2020 issue of e-flux journal contains my essay Performing Preformations: Elements for a Historical Formalism. This is something of an introduction to my two-part book project Forms of Abstraction. The first volume, Objections, was originally scheduled for later this year, but this now seems to be exceedingly unlikely due to the economic repercussions of COVID-19 in the publishing industry. Oddly enough, while production on Objections was halted just as it was about to go to the designer, the long-gestating Art and Autonomy reader has now actually entered the design stage. Go figure. Another book project that is going ahead at full steam is the BAK reader Deserting from the Culture Wars, which we’re finishing this very weekend. As for Forms of Abstraction, I will happily potter away on it regardless, as far as I can make the time to pursue the hobby—that essential luxury—called research. 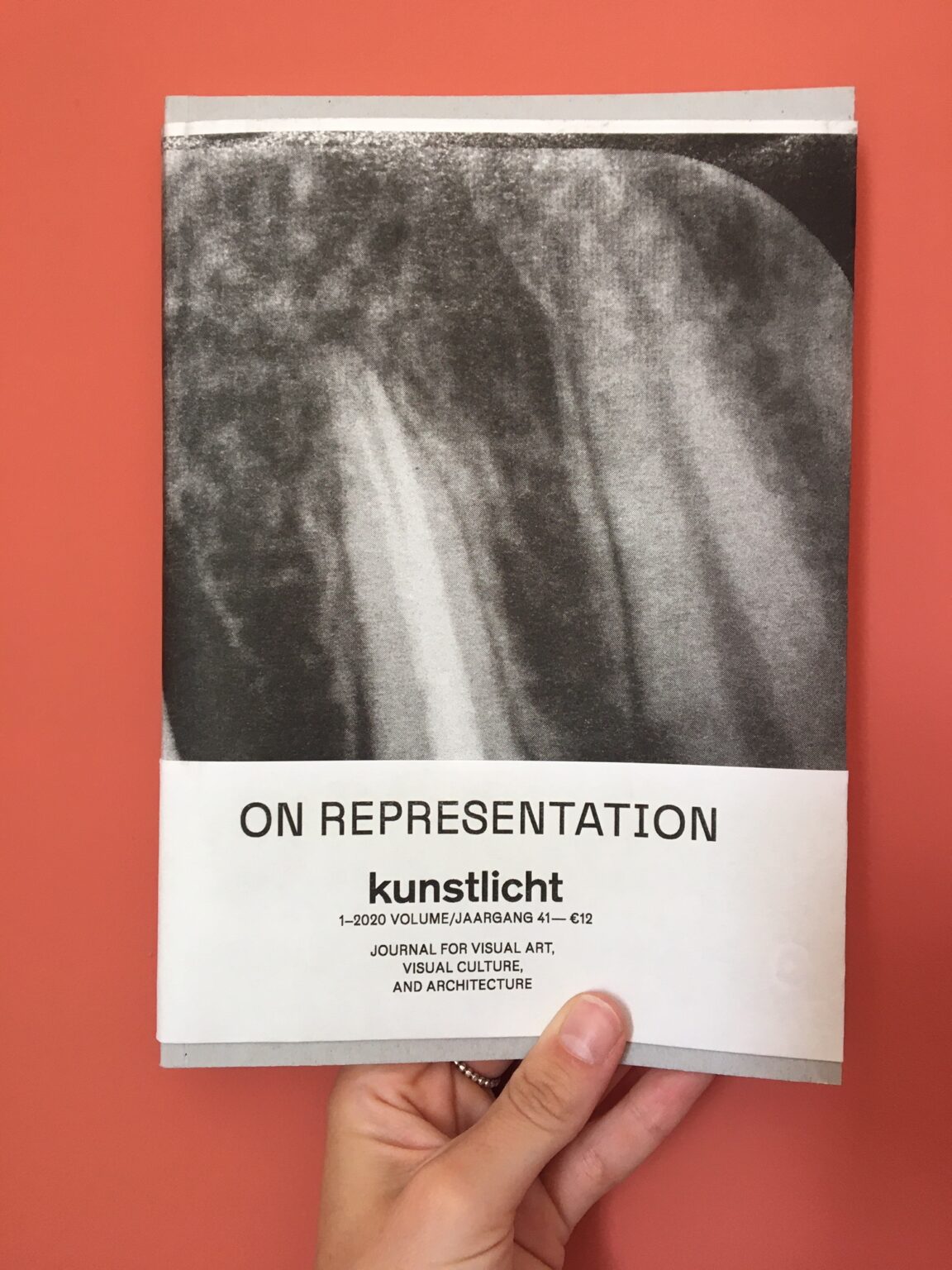 Kunstlicht is a journal by and for young scholars, affiliated with the Art & Culture department of the Vrije Universiteit and largely edited by graduate students. The latest issue is On Representation, and since some of the texts come out of courses I’ve taught, I contributed an introduction. The issue can be ordered here. 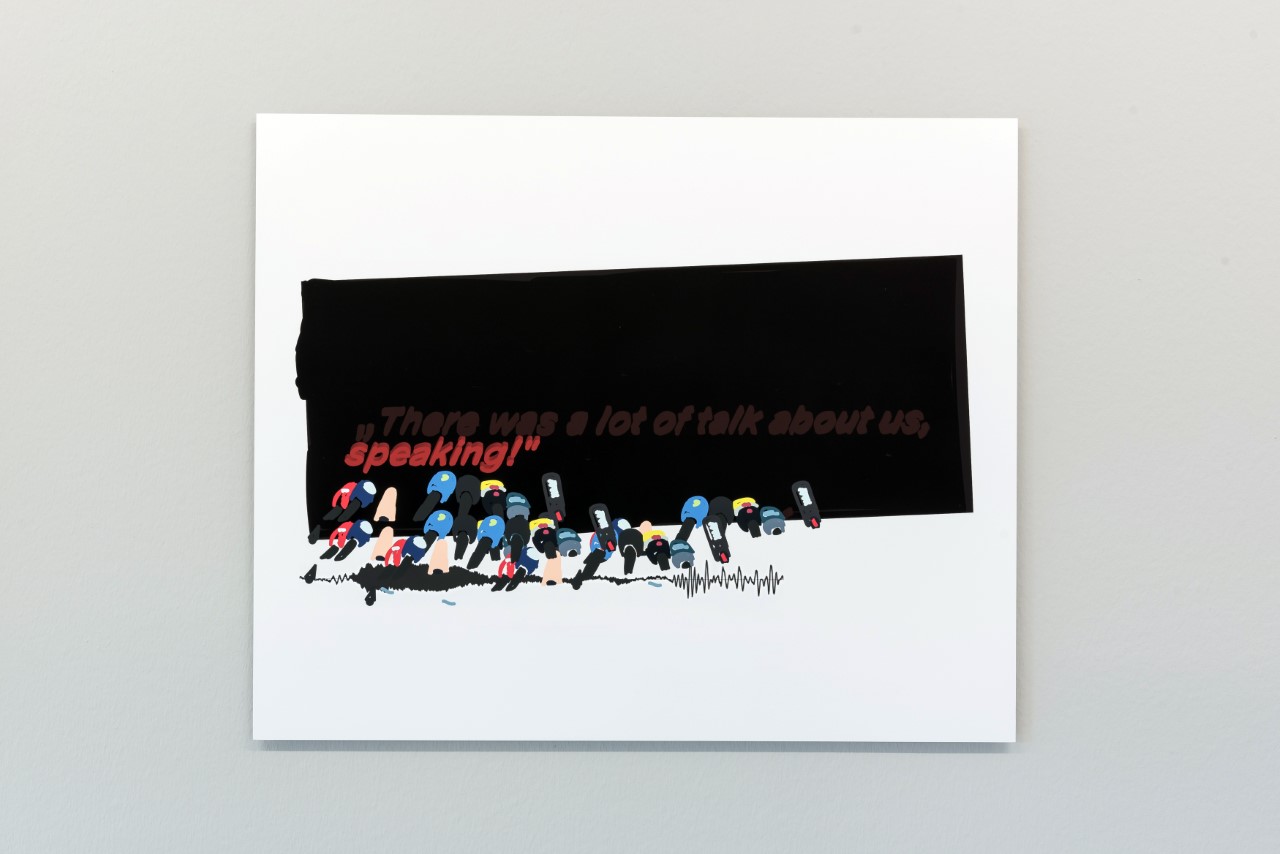 As the corona crisis morphs into a wave of protest inspired by the police killing of George Floyd, in the US and beyond, the latest Texte zur Kunst drops on the doormat. The review section contains my piece on Natascha Sadr Haghighian’s exibition in Leipzig, Ankersentrum/Im Rücken die Alte Ordnung (he she they walked), which revisited the artist’s (or rather: Natascha Süder Happelmann’s) German Pavilion project at the most recent Venice Biennale, Ankersentrum.

The above image is a digital drawing from the series Tumult, which combines quotations by W.EB. Du Bois with images of competing press conferences (by the police and by migrants) about a police raid at Ellwangen refugee center. This particular drawing, with the battery of microphones not positioned before police officials but in front of a black void with the phrase “There was a lot of talk about us, speaking,” seems to have accrued even more emblematic power since I saw it in Leipzig several lifetimes ago, way back in February. As the storm of history intensifies, the project as a whole likewise only grows in relevance. The Ankersentrum publication (published by Archive Books) is recommended. 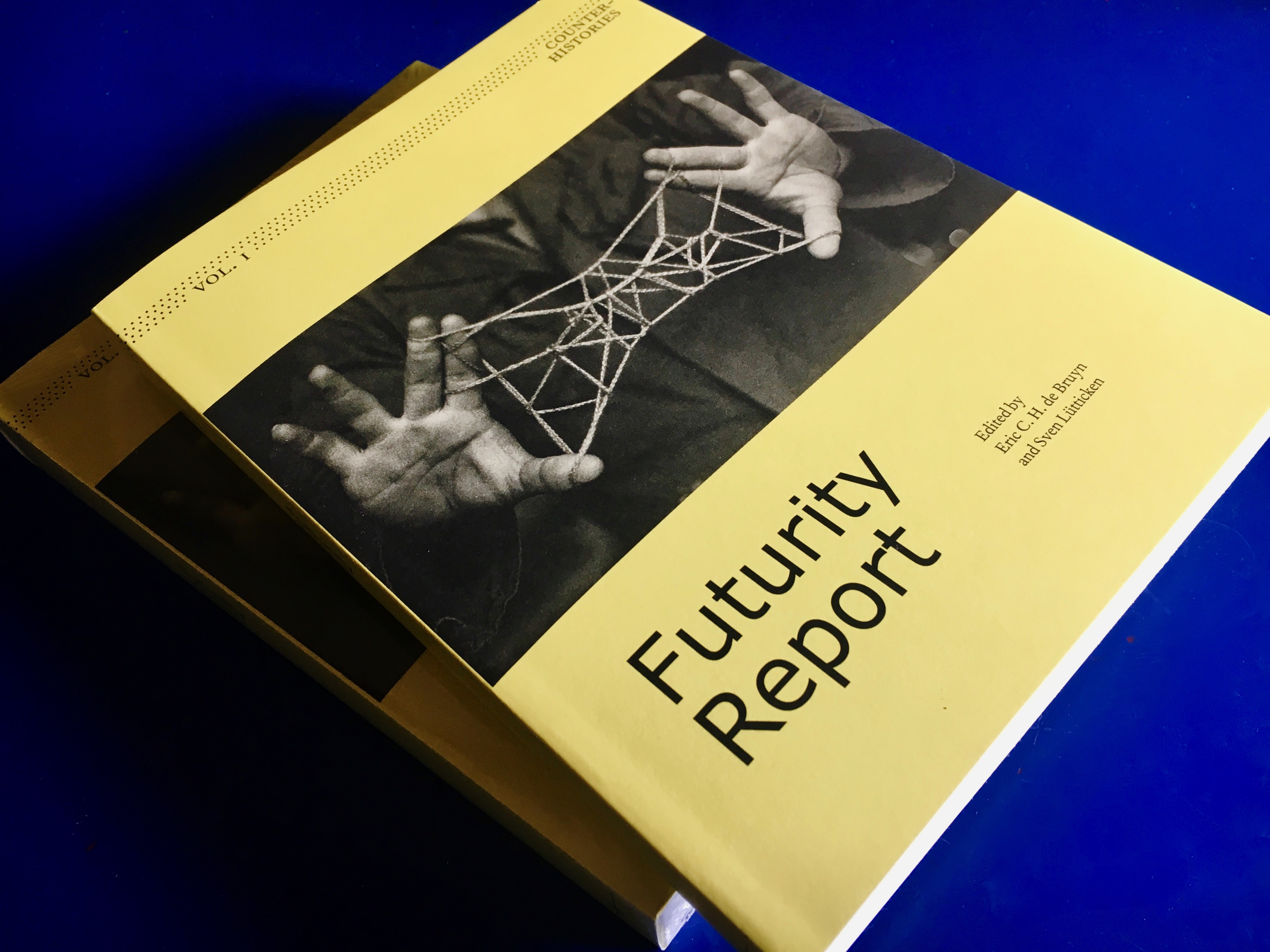 After a long gestation process, Futurity Report (the volume I co-edited with Eric de Bruyn) has been printed and is available. It’s a strange world for it to have been born into, and I’m genuinely curious as to how it will resonate in our New Normal out of low-budget disaster movies. 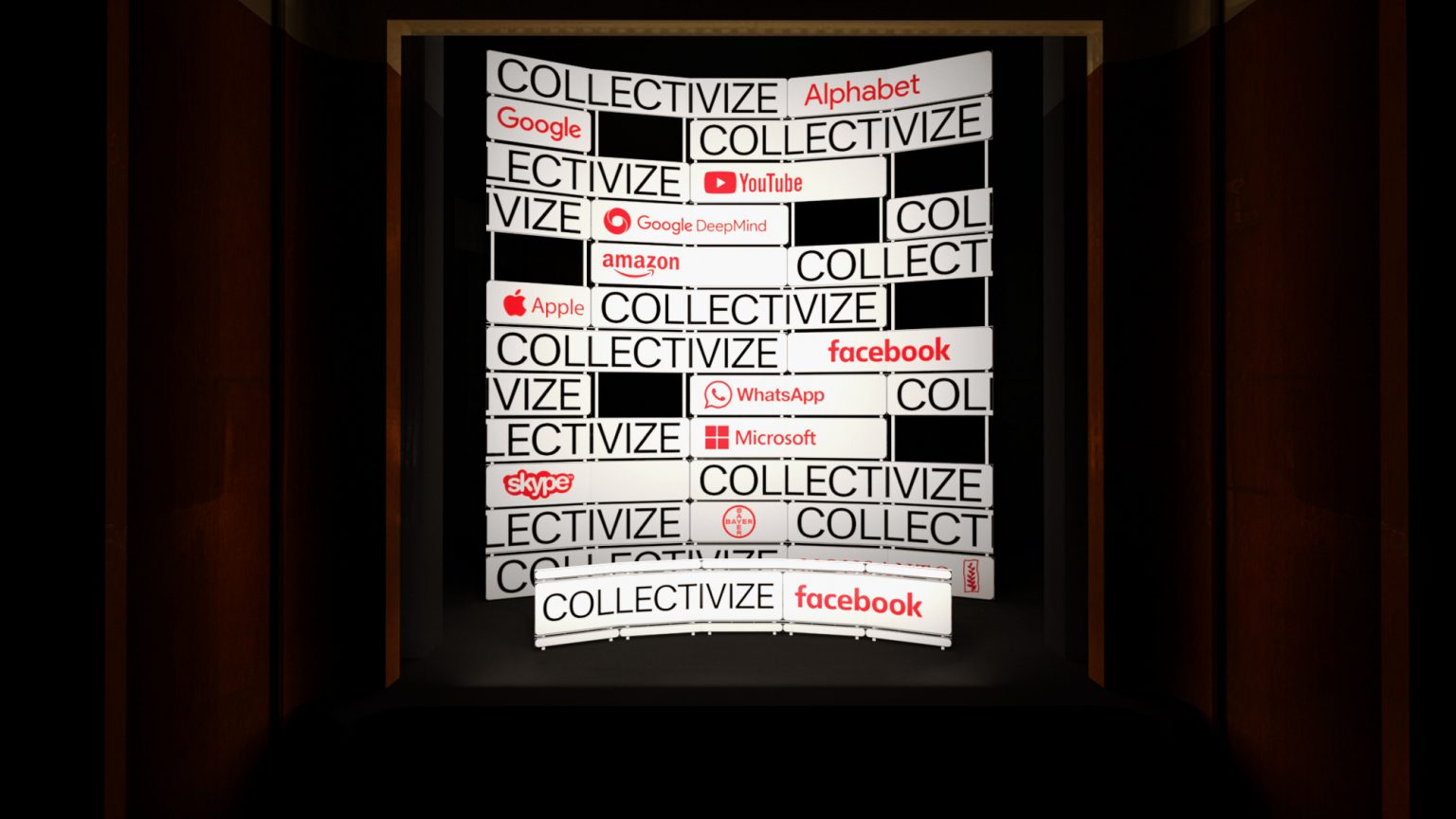 Tom Holert is turning the Harun Farocki Institute’s online journal, Rosa Mercedes, into a vital node for corona criticism from a vantage point of visual art/culture and theory. I contributed a little piece (there’s also a German version) that references Jonas Staal’s Collectivize Facebook event at the HAU, which was of course cancelled due to corona. However, there will be a prerecorded introduction at the HAU’s livestream today at 7 PM, and the website is up and running.

It was a singularly strange experience to be visiting the exclusion zone in Fukushima —with its checkpoints and protective suits—in order to visit the Don’t Follow the Wind project, and to be receiving urgent pleas from friends and family to return to Europe before all borders are closed and everything is on lockdown. On Thursday I arrive back at Schiphol Airport in Amsterdam, though this required a lot of phone calls and an assault on the KLM headquarters in Tokyo. In the case of some other European countries, return would already have been impossible. 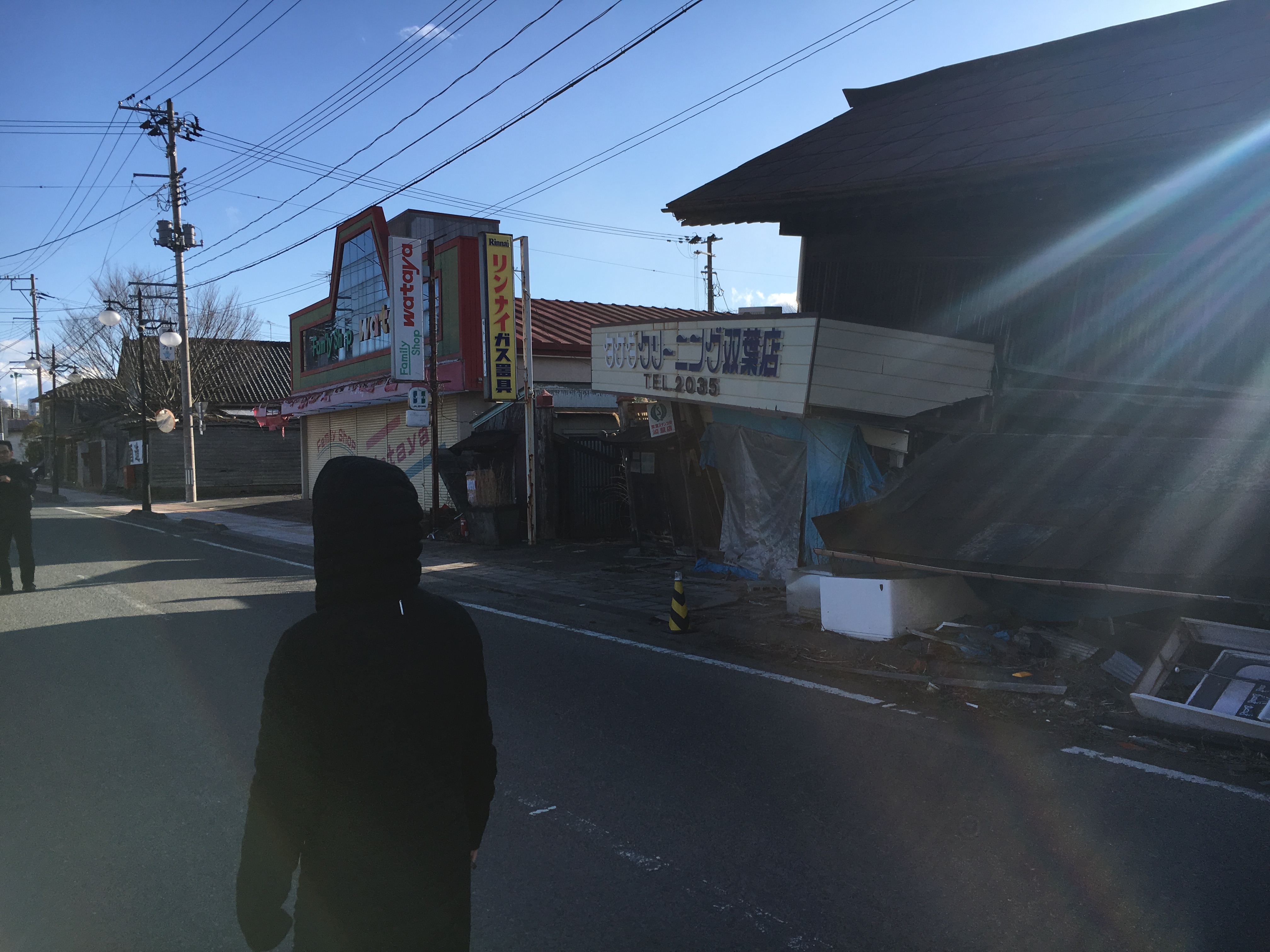 The Fukushima Daiichi disaster and the corona crisis have strange resonances; both are lessons in disaster capitalism and population management through a state of exception.  While wild boar rule the Zone in Fukushima, COVID-19 has spawned memes about dolphins “returning to Venice” stating that “we are the virus, corona is the cure” once again posit a seemingly unified species “we” in the manner of anthropocene discourse. Just like “Fukushima” was a capitalocenic catastrophe, so corona is—to detourn a Warholian term—a social disease that feeds off habitat destruction, intensive farming and air travel.

Neoliberal globalization was always based on a dialectic of borders and movement, of flows and blockages. When I returned home, Krystian Woznicki’s book Undeclared Movements was waiting for me, which open with a good analysis of the pre-corona situation in Europe. Even while clinging on to its ideology of free movement for citizens and goods, since 9/11 and even more so since the “refugee crisis,” the EU has intensified its regime of “deterritorialized borders” against immigrants from North Africa to its own inner cities; the border can now be anywhere, if you’re on the wrong side of it.  The EU was always a colonial project, all its bleating about noble values notwithstanding; as brilliantly reconstructed in Peo Hansen and Stefan Jonsson’s Eurafrica, the project of European unification involved a post-war attempt to consolidate the colonial holdings of the various crumbling European powers.  The corona crisis, with its closed Schengen borders, is a further intensification affecting those whom privilege has so far protected.

Various European countries and institutions failed to respond adequately (or at all) during the crucial early phase of Covid-19’s spread. Now measures have been taken that are both urgently necessary and deeply disruptive. Corona manifests itself in an isolationism that is the complete opposite of how Warhol used the term social disease: to refer to his constant party going. In the cultural field, exhibitions are closed and assemblies as well as publications are postponed. I realize that I’m not nearly as affected as those freelance workers who are fully dependent on the gig economy, but on a personal/selfish note, my (theoretically) forthcoming book Objections has been put on hold due to the pandemic’s impact on the publishing economy. I hope that Sean Snyder’s wonderful exhibition at Rongwrong, which I curated, can stay open at least for individual visitors, even if things look bleak for the gatherings we’d planned. 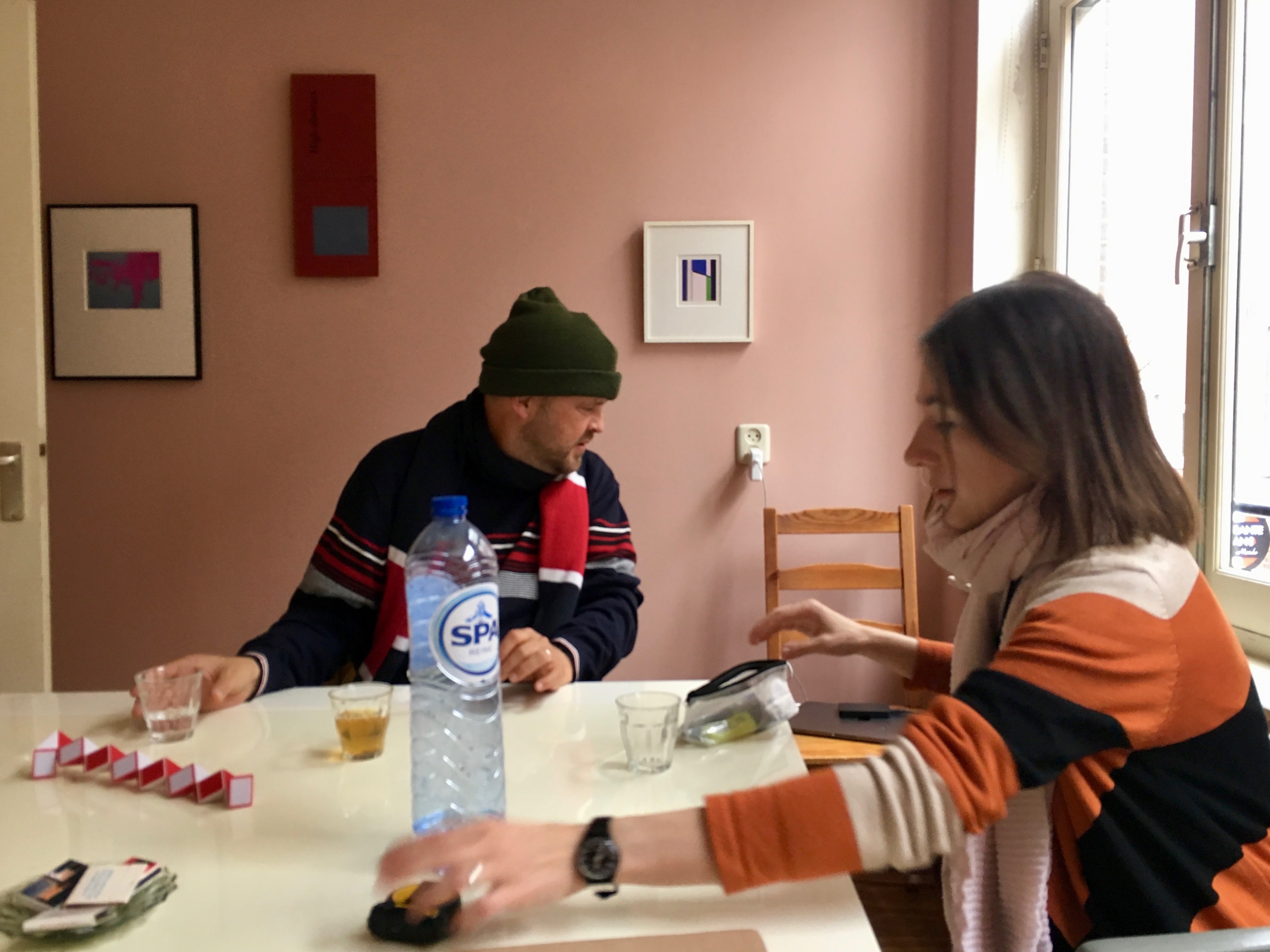 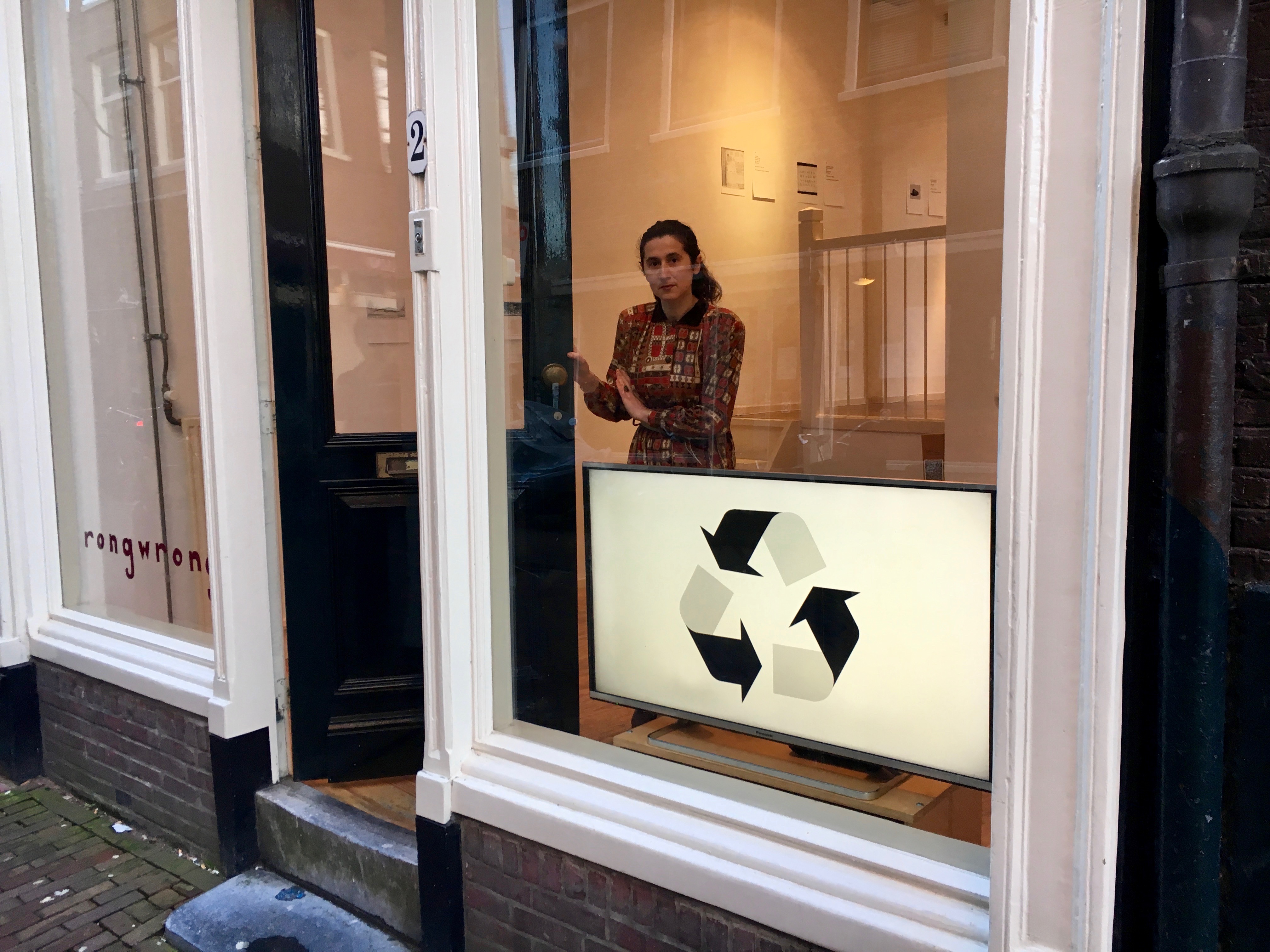 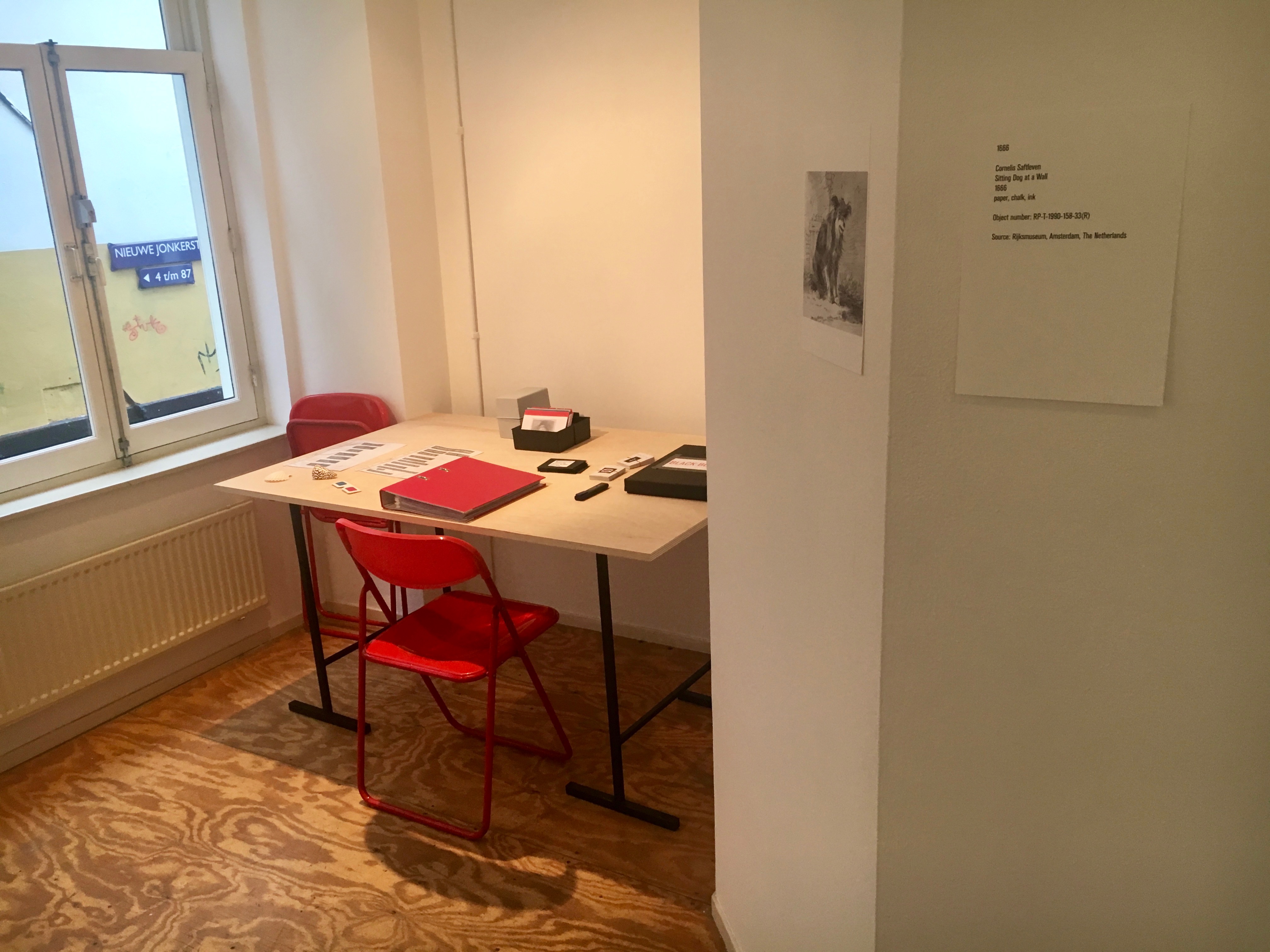 While many forms of critical practice have more or less been suspended, the situation drives those of us in academia deeper in the arms of Silicon Valley, as we are scrambling to figure out which platform for video conferencing/remote learning can work for us (even while we, invariably, will end up working for them).

Anyway, having “made it back” to a country of—how can I put this delicately—ignorant and inconsiderate troglodytes, I’ll try to weather the storm here and keep working with my students and on my research. I hope you are well wherever you are. 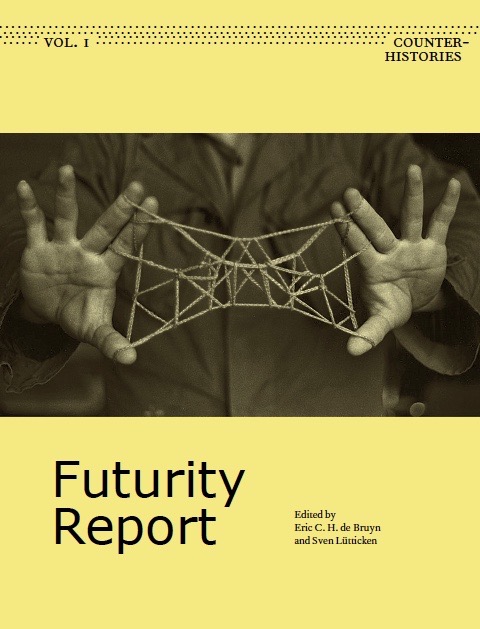 April will see the release of the long-gestating volume Futurity Report, which I co-edited with Eric de Bruyn. Published by Sternberg Press as the first volume in the Counter-Histories series, Futurity Report was conceived as a critical intervention in a discourse that has swung from left melancholia to manic accelerationism. While challenging the presuppositions and ideological agendas of today’s neo-futurisms, our constellation of contributions refuses to abandon the futural dimension of history. Futurity is too important to be left to its hypesters and hucksters. 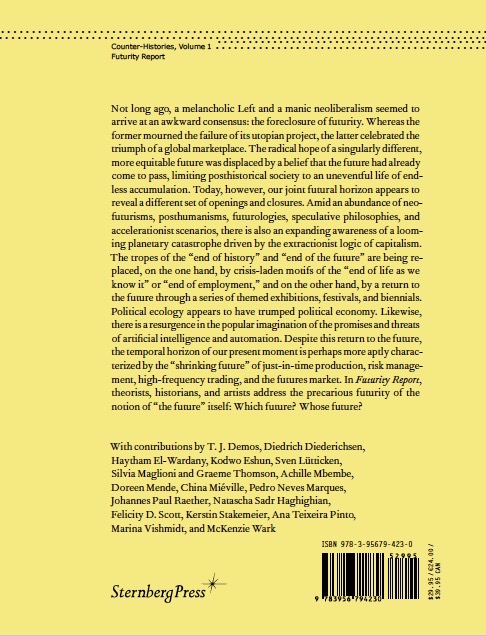